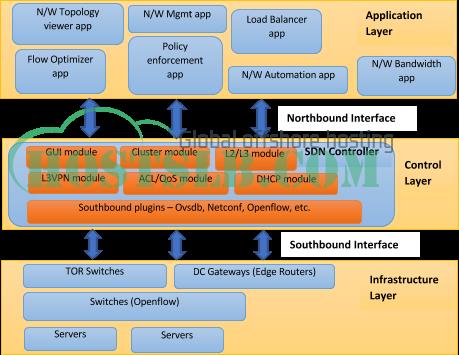 In our previous article, we had a good overview of SDN as a technology, why it’s needed, and how IT industry is adopting it. Now, let’s get a layer deeper, and understand SDN’s architecture and the role of the Openflow protocol in the implementation of the technology.if(typeof __ez_fad_position != ‘undefined’){__ez_fad_position(‘div-gpt-ad-howtoforge_com-box-3-0’)}; Let us try and understand these layers in bottom-to-up approach.

Infrastructure layer is composed of various networking equipment which forms underlying network to forward network traffic. It could be a set of network switches and routers in the data centre. This layer would be the physical one over which network virtualization would be laid down through the control layer (where SDN controllers would sit and manage underlying physical network).

Control layer is the land of control plane where intelligent logic in SDN controllers would reside to control network infrastructure. This is the area where every network vendor is working to come up with their own products for SDN controller and framework. Here in this layer, a lot of business logic is being written in controller to fetch and maintain different types of network information, state details, topology details, statistics details, and more.

Since SDN controller is for managing networks, so it must have control logic for real world network use-cases like switching, routing, L2 VPN, L3 VPN, firewall security rules, DNS, DHCP, and clustering. Several networking vendors and even open source communities are working on the implementation of these use-cases in their SDN controllers. Once they get implemented, these services expose their APIs (typically REST based) to the upper layer (Application layer), something which makes life easy for network administrators who then use apps on top of SDN controllers to configure, manage and monitor underlying network. Control layer lies in middle and it exposes two types of interfaces – Northbound and Southbound.

Application layer is open area to develop as much innovative application as possible by leveraging all the network information about network topology, network state, network statistics, etc. There can be several types of applications which can be developed like those related to network automation, network configuration and management, network monitoring, network troubleshooting, network policies and security. Such SDN applications can provide various end-to-end solutions for real world enterprise and data centre networks. Network vendors are coming up with their set of SDN applications. For example, Brocade has following very useful applications:

HPE is also one vendor having SDN App store which contains many SDN apps from different companies as well. For example:

As we briefly touched Openflow in previous article, we would now cover details of southbound communication from control layer to infrastructure layer (network switches) through Openflow protocol.if(typeof __ez_fad_position != ‘undefined’){__ez_fad_position(‘div-gpt-ad-howtoforge_com-medrectangle-4-0’)};

Openflow has been instrumental in the revolution of SDN in the sense that it has been key to show-case separation of control plane from data plane. Openflow is the standard specification provided by Open Networking Foundation (ONF), and is evolving over the time with support for various requirements of current world networking. Current version of the Openflow protocol is 1.5.1.

Openflow is a protocol which gives standard specification for communication between SDN controller and network equipment (typically switches). It allows routing decisions to be taken by SDN controllers and let forwarding rules, security rules being pushed on switches in underlying network.

SDN controller and switches need to implement Openflow specifications so that they can understand common language of Openflow messages. To control network switches, SDN controller will push rules into switches so that they can take decision when network traffic hits them. Switches need to maintain such rules in Openflow table. As per Openflow, such rules are called ‘flows’ and they are stored in ‘flow tables’.

To be specific, flows contain some more information which can be checked further in Openflow specifications.

Till now, we have gone through SDN architecture, its layers and role of Openflow to realize SDN core principle to separate control plane from data plane. Now we need to see how controller would be able to use Openflow to configure and manage underlying network.

Basically, controller would need to implement some plugin code of Openflow by which it can send, receive and understand Openflow messages to and from Openflow switches in underlying network.

To perform some vendor specific tasks on Openflow switches, Openflow provides experimental messages wherein vendors have freedom to define message body and exchange custom information between controller and switches. That is how Openflow is being used by many SDN applications to provide solutions for easy network control and management.