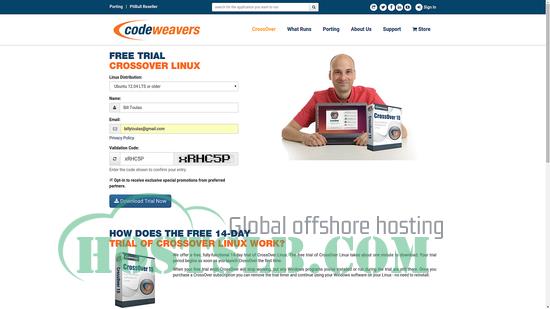 Codeweavers has released a new major version of Crossover, the popular Microsoft Windows compatibility layer which is now based on Wine 1.8. The software is commercial and it costs around $40, but there is also a two-week trial version which is fully functional and can be downloaded for free. For this quick guide, I will be using the latter to show how you can install, set up, and run Windows executables with Crossover 15. After the download of the file is completed, navigate to the destination and make the file executable by right clicking and choosing “properties”, and then enabling the corresponding options. Next, open a terminal on this folder and insert the following command:

This should launch the graphical installer of the software. After the installation is done, the software is auto-started for the first time. The main screen contains one button entitled “Install Windows Software”.if(typeof __ez_fad_position != ‘undefined’){__ez_fad_position(‘div-gpt-ad-howtoforge_com-medrectangle-4-0’)}; Pressing this button will take you on a procedure that consists of three steps. One way to begin is to search for a particular application in the Codeweavers’ database on the first step. The benefit of this choice is that there will be a special configuration loaded for this bottle, based on the testing that has been done and reported. The default wine configuration doesn’t always work well with everything, so if the application you want to install is contained in the list, go with this choice. You may even choose to let Crossover download the installer for you if it isn’t present in your system. If the application that you want to install isn’t in the list, just type it on the first step and continue on the second step of “Select Installer”. If you have a game DVD or CD, you should select the “Installer Folder” option. As I will use one installer file, I will select the first option. After having done all of the above, you will be presented with a summary screen. Hit “Install” on the lower right to initiate the installation. Upon the completion of the installation, a new bottle is created with the previously given name. Press the “bottles” button on the top left, and then select the “Run Command” on the right. This will allow you to navigate the contents of the “c:” partition, so you may locate the executable(s) of the installed application. After selecting the executable you want to run, you may either run it directly, or create a Launcher for it. All in all, Crossover 15 is a user-friendly “wraper” for Wine 1.8 which is now a mature piece of software, able to run many Windows executables with great success. While one can theoretically do the exact same things on Wine with Winetricks, I find Crossover much simpler and quicker to use. Codeweavers is also promising some extra functionality through special plugins and configuration that guarantees the running of popular production software and games, but I have no way of confirming this. My opinion is that it is worth the price, especially considering that by purchasing Crossover you support many of Wine’s regular contributors who work in Codeweavers.