Raspberry Pi Basics: installing Raspbian and getting it up and running

Home / Raspberry Pi Basics: installing Raspbian and getting it up and running 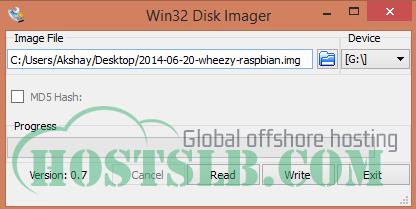 Raspberry Pi Basics: installing Raspbian and getting it up and running

So, are you a person who got a Raspberry Pi (aka “Pi”) and want to start building something with it but don’t know how to go about it? If yes, then this tutorial is for you. Here in this howto, we go about installing the Raspbian OS and initiating a desktop environment.

Raspberry Pi is a credit card sized micro processor available in different models with different processing speed starting from 700 MHz. Whether you have a model B or model B+, or the very old version, the installation process remains the same. People who have checked out the official Raspberry Pi website, might have seen them recommending the “NOOBS” or “NOOBS LITE” Operating System (aka “OS”) for beginners. But using the Pi is very easy and from being a beginner, one will turn pro in no time. So, it’s better to go with the more powerful and more efficient OS, the Raspbian. The main reason why Raspbian is extremely popular is that it has thousands of pre built libraries to perform many tasks and optimize the OS. This forms a huge advantage while building applications.

Download the latest version of Raspbian from here. You can download it directly or via the torrents.

You will be needing an image writer to write the downloaded OS into the SD card (micro SD card in case of Raspberry Pi B+ model). So download the “win32 disk imager” from here.

Insert the SD card into the laptop/pc and run the image writer. Once open, browse and select the downloaded Raspbian image file. Select the correct device, that is the drive representing the SD card. If the drive (or device) selected is different from the SD card then the other selected drive will become corrupted. SO be careful.

After that, click on the “Write” button in the bottom. As an example, see the image below, where the SD card (or micro SD) drive is represented by the letter “G:\” Once the write is complete, eject the SD card and insert it into the Raspberry Pi and turn it on. It should start booting up.

3 Setting up the Pi

Please remember that after booting the Pi, there might be situations when the user credentials like the “username” and password will be asked. Raspberry Pi comes with a default user name and password and so always use it whenever it is being asked. The credentials are:

When the Pi has been booted for the first time, a configuration screen called the “Setup Options” should appear and it will look like the image below. If you have missed the “Setup Options” screen, its not a problem, you can always get it by typing the following command in the terminal.

Once you execute this command the “Setup Options” screen will come up as shown in the image above.

Now that the Setup Options window is up, we will have to set a few things. After completing each of the steps below, if it asks to reboot the Pi, please do so. After the reboot, if you don’t get the “Setup Options” screen, then follow the command given above to get the screen/window.

Once, both the steps are done, select the “finish” button at the bottom of the page and it should reboot automatically. If it doesn’t, then use the following command in the terminal to reboot.

After the reboot from the previous step, if everything went right, then you will end up on the desktop which looks like the image below. Once you are on the desktop, open a terminal and enter the following command to update the firmware of the Pi.

Updating the firmware is necessary because certain models of the Pi might not have all the required dependencies to run smoothly or it may have some bug. The latest firmware might have the fix to those bugs, thus its very important to update it in the beginning itself.

So, we have covered the steps to get the Pi up and running. This method works on all the different models of Raspberry Pi ( model A, B, B+ and also RPi 2) as Raspbain was made to be supported on all models. However, while installing other software or libraries , the procedure might change a bit while installing depending on the model of the Pi or the version of Raspbian itself. The concept of Raspberry is to keep trying till you get he result or build that you want. This might involve a lot of trial and error but spending the time will be worth it. The actual usage doesn’t end here. This is just the beginning. It is up to you to go ahead to build something amazing out of it.