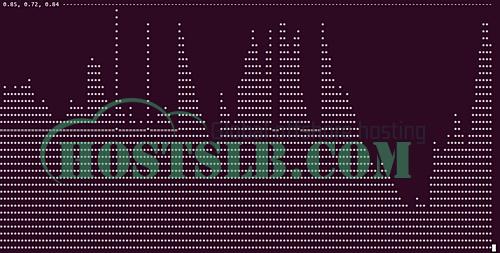 While there are a lot of UI-based tools in Linux that you can use to see a graphical representation of system load, the number of command line tools that do the same work is pretty less. One such utility is tload, which will be discussing in this tutorial.eval(ez_write_tag([[728,90],’howtoforge_com-box-3′,’ezslot_5′,106,’0′,’0′]));

The tload command in Linux provides you with a graphic representation of system load average. Following is its syntax:

Following are some Q&A-styled examples that should give you a better idea on how the tload command works.

Basic usage is pretty straight forward – just execute ‘tload’ sans any option. The graph produced in output will likely take some time to build up, but after sometime, you’ll see something like this: The graph, as you can see, consists of symbols like *, =, and -. While the tool’s man page doesn’t say anything about these symbols, there’s some useful explanation about this on a serverfault thread.

Yes, it does. The option is -s. Here’s how the tool’s man page explains it:

Q3. How to set delay in graph updates?

When you run the tload command, you’ll notice that the graph it produces continuously updates. However, if you want, you can set a delay between graph updates.

This can be done using the -d command line option. For example:

This command will ensure the graph updates after 5 seconds.

Agreed, this command is mostly for system admins. The number of options it offers is also limited. We have already discussed the major options this utility offers. To learn more, head to the tload man page.