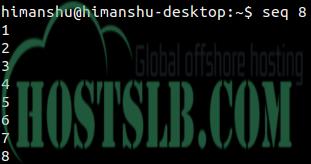 Sometimes, you come across a command line tool that offers limited functionality on its own, but when used with other tools, you realize its actual potential. Once such tool is seq, which prints a sequence of numbers. In this tutorial, we will discuss the basics of this command line utility using easy to understand examples.

As already mentioned, the seq command lets you print a sequence of numbers. Following is its syntax:

Following are some Q&A-styled examples that should give you a better idea on how the seq command works.

Basic usage is very easy. All you have to do is to pass a number to seq, and the tool will producein output numbers from 1 to the input number. Of course, you can also specify the number from which you want the output to begin with.

Movin on, you can also set the incremental difference, which is 1 by default. For example, if you want seq to print from 1 to 9, but with a difference of 2, then here’s how you can do that:

Q2. How to add a separator?

If you want, you can also have a separator to make the seq output look better. This feature is available through the -s command line option.

For example, the following command intends to use a comma (,) as a separator:

Q3. How to specify output format?

The seq command allows you to use printf style floating-point FORMAT. This feature is accessible through the -f command line option. The tool’s man page doesn’t have much information on how to use this option, but the info page contains the required details. Here’s what the info page says:

For example, you can use this option in the following way: Suppose you want to perform addition of some numbers, say from 111 to 121. Here’s how you can do this using seq:

Here’s the above command in action:

Suppose you want to create a bunch of new files with names where only an integer value changes. For example, file1, file2, file3, and so on. Here’s how you can do this using seq.

So now you’ll agree how useful the seq command is. If you talk about the command line options Seq offers, there’s not much of a learning curve, just that you should know when and how to use the command and its options. We’ve covered several use cases here – should be enough to get you started with the tool. For more information on Seq, head to its man page.