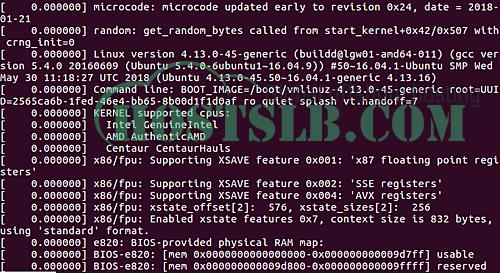 Do you know the Linux kernel loads several device drivers when the system boots? In fact, when your system is up and running, and you connect a hardware device, then also a corresponding device driver gets loaded. Of course, the kernel also does a lot of other stuff. What if you want to know info related to these kernel activities?

Well, there exists a command – dubbed dmesg – that you can use if you want to access messages printed by kernel. In this tutorial, we will understand how the dmesg tool works using some easy to understand examples.if(typeof __ez_fad_position != ‘undefined’){__ez_fad_position(‘div-gpt-ad-howtoforge_com-medrectangle-3-0’)};

The dmesg command lets you print or control the kernel ring buffer. Following is its syntax:

Following are some Q&A-styled examples that should give you a better idea on how the dmesg command works.

Q1. How to use dmesg command?

You can start using the dmesg command sans any command line option.

For example, here’s a small part of output the command produced in my case: Q2. How to limit the output only to error and warnings?

If you run dmesg on your system, you’ll observe it outputs plethora of information. Depending upon what you’re looking for, you may want to filter or limit the output. For its part, dmesg offers you this ability through ‘levels.’ Following is the complete list of levels (along with their explanation):

So for example, if you want to limit the output to only error and warnings, you can do that in the following way:if(typeof __ez_fad_position != ‘undefined’){__ez_fad_position(‘div-gpt-ad-howtoforge_com-medrectangle-4-0’)};

In my case, here’s a part of output the above command produced:

Q3. How to make dmesg produce timestamps in output?

Sometimes, you may want a timestamp to be associated with the messages dmesg produces. This can be done using the -T command line option, which produces human readable timestamps.

Following is an example output: So you can see a timestamp is pre-fixed with each message.

Q4. How to make dmesg display info specific to a device?

Suppose you want dmesg to only display info related to eth0 interface. Here’s how you can do that:

Following is an example output:

Q5. How to make dmesg display only userspace messages?

Agreed, dmesg is not the kind of command you’ll need everyday. But this is the tool to turn to when someone (whom you’ve asked for help on certain topic) asks you to provide kernel messages. I’ve mostly seen this case in online user forums, where experienced users ask for kernel output.

Here, in this tutorial, we have discussed the dmesg command from beginners point of view (just to get you started). Once you are done practicing all that we’ve discussed here, head to the tool’s man page.