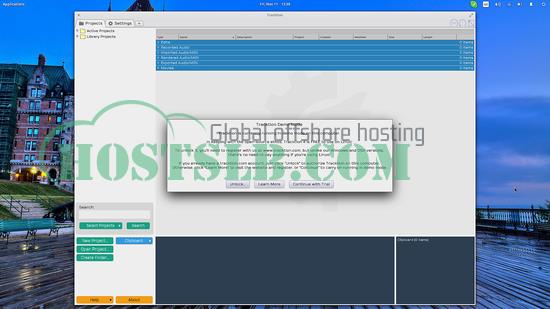 Tracktion is one of the most popular digital audio workstations and one of the very few that are available for the Linux platform along with the magnificent Ardour. While Tracktion is distributed under proprietary software licenses, its creators felt that they should give back something to the Linux community as they have used open source tools for the building of their product. That is why the fifth version of the software that was released in 2014 is now available for free for all Linux users. The purpose of this quick guide is to demonstrate how to create a new recording project, perform basic editing and mixing, and export with filters. The capabilities of this software go well beyond what is covered by this post which is only meant to serve as an introduction.

First, we have to create a new project by pressing the corresponding button on the bottom left, then add the details like the name and destination, and click on the “Create Project” Next, we need to add our audio file. As a first example, I will suppose that we recorded audio using another tool and have the resulting .mp3 file on our local drive. By pressing “Import Material → Import and Audio or Midi file” we can select our file from the disk and insert it into our project. Note that we can also select multiple files or a folder containing multiple audio files. Once we add the file, the application will populate a list on the central space containing the wave and the edit items. To proceed with basic editing tasks, click on the wave item and it will be displayed on the bottom (clip viewer). Then you can click on the “Edit Audio File → Basic Editing Operations” and you will get a menu of editing options containing Trim Silence, Normalize, Stereo to Mono, Change Sample Rate, and Reverse. During this stage, you may also add markers on the audio by dragging the yellow arrow that points down into a new marker position. Now let’s suppose that we want to record on the application instead of importing a file. To do this, we double-click the “edit” item on the list menu of our project and we are taken on the newly opened tab that allows us to perform track editing. There, we enable the recording on the first track by clicking on the “R” that is located right on the tip of the track arrow as shown in the following screenshot.if(typeof __ez_fad_position != ‘undefined’){__ez_fad_position(‘div-gpt-ad-howtoforge_com-medrectangle-4-0’)}; After this, we click on the “record” button on the bottom right and the recording will start. If not, it means that you have not set a valid input device. In that case, go to the settings by selecting the corresponding tab on the top and then select “Audio Categories”, set to “ALSA” or “JACK” depending on what source you’re using, and then select a valid input device. There’s a live sound level monitor that will help you verify your selection. Remember to ensure that your input source is active and set at an adequate level on the “Alsa Mixer”. If we want to mix our recording with another audio file, we can use the file manager window on the left to simply drag and drop the file that we want on a new channel. Before we do that, we must click on the second track and select the channel 2 option. Note how we can now choose to depict the two channels with two distinctive colors, add loop effects, markers, wave gain, and fade out/in of different forms right from the options that opened up on the bottom. To export your work on a file, click on the “Export → Render to a File” option on the bottom left and select the destination and properties of the file that is to be generated. These properties include the audio file format, the sample rate and size, the exported channels options, and the always useful “Normalise”. In general, and no matter what you prefer between Ardour and Tracktion, this “free for Linux users” version features a very nice MIDI engine that allows multiple channel recordings, a user-friendly plugins management and utilization system, support for many proprietary codecs like Windows Media Audio, and a quality audio engine with much versatility as to how many resources the application is allowed to use – up to the CPU core number and load level. All this plus the fact that the user interface is much easier to work with compared to Ardour’s that requires greater digging for some common tasks, making it a useful and welcomed addition to the Linux audiophile’s toolbox since we don’t really have many professional-level MIDI and proprietary sound plugin tools to work with.Advertisement.banner-1{text-align:center; padding-top:10px !important;padding-bottom:10px !important;padding-left:0px !important;padding-right:0px !important;width:100% !important;box-sizing:border-box !important;background-color:#eeeeee !important;border: 1px solid #dfdfdf}if(typeof __ez_fad_position != ‘undefined’){__ez_fad_position(‘div-gpt-ad-howtoforge_com-banner-1-0’)};