How to use Dropbox Cloud Storage in Ubuntu 15.04

Home / How to use Dropbox Cloud Storage in Ubuntu 15.04 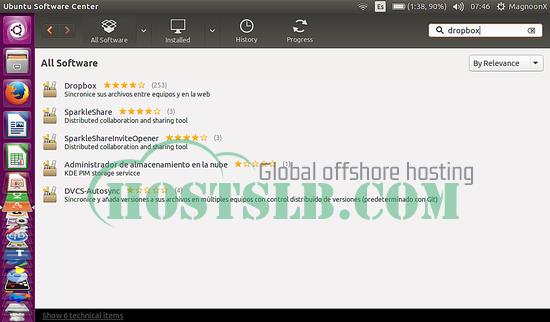 How to use Dropbox Cloud Storage in Ubuntu 15.04

Canonical was the first Linux Distribution to integrate its own cloud service into its Linux Distribution Ubuntu, but, unfortunately, their cloud storage is lagging behind other services feature wise. Thanks to the work of many developers, Ubuntu is resolving these shortcomings and is making other Cloud services available trough the Ubuntu Software Center. One of these developments is “Dropbox for Ubuntu”. Dropbox synchronizes folders in your PC with a virtual hard disk on the cloud. This tutorial shows the installation of Dropbox in Ubuntu 15.04if(typeof __ez_fad_position != ‘undefined’){__ez_fad_position(‘div-gpt-ad-howtoforge_com-box-3-0’)};

The first thing we do is install Dropbox from the Ubuntu Software Center.if(typeof __ez_fad_position != ‘undefined’){__ez_fad_position(‘div-gpt-ad-howtoforge_com-medrectangle-3-0’)};

Let´s click on the software center and search “Dropbox”. Please keep in mind that Dropbox, as it is proprietary software, comes in a package which, in turn, downloads the  Daemon from droppbox.com. This is the reason that we can not install Dropbox through a shell command. After installing the loader package, it is recommended to restart the PC, then look for the application by typing Dropbox and start it with a double click. This package will prompt you to install the Dropbox daemon. First Use of Dropbox

The following screen will be shown after the Daemon installation: You need a Dropbox account, visit dropbox.com to get one. Once you enter your account details, Dropbox will begin its first synchronization between the virtual hard disk (cloud) and your local folders. Now you can see your synced files.