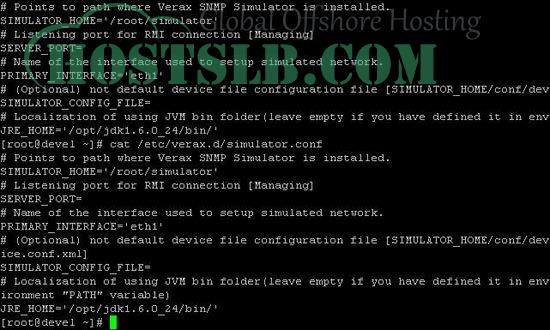 This tutorial explains how you can simulate network devices for testing purposes with the free Verax SNMP Simulator. Verax SNMP agent simulator is a tool that can simulate multiple SNMPv1/v2c agents on a single host on standard 161 port through multi-netting. It allows IT personnel to build virtual, simulated networks of devices without purchasing any additional hardware, for instance for testing purposes. Individual simulated agent responses can be initially retrieved from existing devices and modified at runtime by user defined rules.

The Verax SNMP Agent
Simulator can be installed on 32 and 64 bit Linux distributions
including: SuSE, RedHat Enterprise and Debian using i386 and x64
architectures. It can be also installed in any operating environment
supporting Java 1.6 or higher (AS/400, FreeBSD and others).

Before the installation you should check:

The installation process consists of the following steps:

At this stage simulator is ready to run, but it is recommended to edit device.conf.xml file first. Otherwise, the default
configuration will be used. Issue the following command in the terminal window shell:

Each simulated network device is represented by set of
SNMP objects which are exposed by the simulator and can be read by external
applications (e.g. by network management system). SNMP objects are kept in files called
SNMP record files. Each SNMP record file contains SNMP objects representing a single
device type (e.g. Cisco switch).

SNMP record file is a plain text file in which one line represents one SNMP object.
Single line in this file has the following format: If more than one device is simulated
based on the same SNMP record file, each device will expose the same SNMP object
values. To differentiate object values, separate SNMP record files with different
values can be created (which often requires a lot of manual work) or modifiers can be
applied. Using modifiers requires the user to familiarize himself with the modifier
syntax, however it speeds up the process of defining simulated devices especially for
large networks. Modifier is an optional element in object definition in SNMP record
file that follows object value and modifies it.

There are two types of modifiers:

Pre-loaded modifier – object value is
modified upon simulator start when SNMP record files have been loaded. This modifier
generates constant value of object which will be returned on every object read
operation.

Post-loaded modifier – object value is
modified on every object read operation. The value returned will be different each time
it was read. This modifier can be used to simulate performance counters or other
objects representing constantly changing metrics.