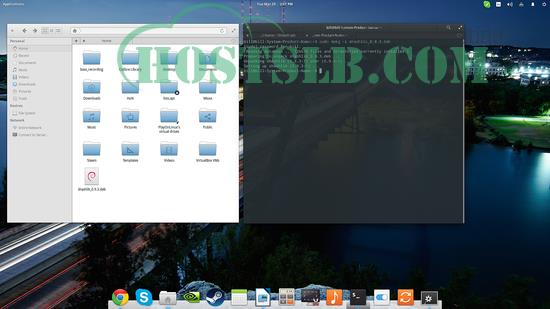 Shashlik is basically a set of software components that allow Linux users to install and run Android APKs right on their GNU/Linux distribution. Shashlik achieves that by using a stripped down version of Android instead of emulating one, which is nested inside the user session upon the launching of an installed Android application. The rendering of the graphics in the app is undertaken by the OpenGL infrastructure of our system, so the performance is good for what is well supported.if(typeof __ez_fad_position != ‘undefined’){__ez_fad_position(‘div-gpt-ad-howtoforge_com-box-3-0’)};

Unfortunately, Shashlik is still under heavy development and doesn’t support many applications yet, but still you may find many useful apps that are working like a charm. The only absolute prerequisites are that you are not running another virtualization process in the same time that you are trying to run Shashlik, that the APK used in Shashlik was built to run on x86 architecture, and that Shashlik is installed on a 64-bit Linux system. Its developers also suggest running their software on the KDE Plasma environment, as they are testing it on this only, but I can also confirm that it works on Pantheon as well (with some relevant error messages).if(typeof __ez_fad_position != ‘undefined’){__ez_fad_position(‘div-gpt-ad-howtoforge_com-medrectangle-3-0’)};

Shashik’s latest version at the time of writing this is 0.9.3 which you can download from this web page. There are Debian (Ubuntu) and Arch pre-built packages that you may use depending on your system, while several users of Fedora and Suse systems report that alien-generated RPMs work as well. Ubuntu users may install the downloaded package by opening a terminal on the download location and typing the following command: You may also try to compile Shashlik from source by following the instructions found on the official website, but I wouldn’t recommend this option as you will have to move the binaries and libraries in the right locations yourself – at least for now.

After Shashlik is installed, visit an APK database and download the application that you want to run with Shashlik. Then open a terminal on the location of the downloaded APKs and type the following command to install it to your system: “/opt/shashlik/bin/shashlik-install name_of_apk_file”. As an example, I installed the Viber apk as shown in the following screenshot: Next step is to run the APK by typing the following command on the same terminal session: “/opt/shashlik/bin/shashlik-run name_of_splash_png name_of_apk_file”. One important thing to note at this point is that during the installation, Shashlik has created and stored some required files in /.local/share/shashlik. Those files include the splash png image file and the userdata.img. Upon launching an APK, Shashlik looks for the file you have indicated in the command. So, if there is a splash.png corresponding to an application named test.apk, the command becomes: “/opt/shashlik/bin/shashlik-run splash test.apk”. Here’s how I did it for Viber To make things simpler, I should point out that the APKs are installed in our system with the command I showed previously, so if you look for them in the applications menu/dash you should find them and run them with a simple click. This however, may not work well for all apps, but if it does it’s quite handy. Whatever the case, you should know how to run it from the terminal in order to get the insight needed to solve any issues. As there is currently no uninstall function implemented, you can manually remove the binaries installed by Shashlik by navigating to /.local/share/applications and deleting the corresponding files. This should remove them from your applications menu.

As the software hasn’t even reached its first stable version, you can’t fiddle with any options that could be critical to the user experience with certain apps. The case of setting the emulator to the landscape screen mode is a usual one, so here’s how to do it. Open your file manager as administrator and navigate to /opt/shashlik/bin and open “shashlik.run with your favorite text editor. Then locate the “-noskin” argument and replace it with “-skin 480×320” or any other resolution in the standard ratios. Shashlik may be unstable and not very powerful just yet, but the fact that it is very simple to use doesn’t go unnoticed and unappreciated. With time, I am sure that it will become even leaner and even more successful in regards to how many apps it can run. People report demanding 3D games running well on Shashlik which is indicative of what the software can already do. Have fun testing Android apps on Linux, and good luck running them!