First Steps Of Running Linux Via Terminal Instead Of Desktop

Home / First Steps Of Running Linux Via Terminal Instead Of Desktop 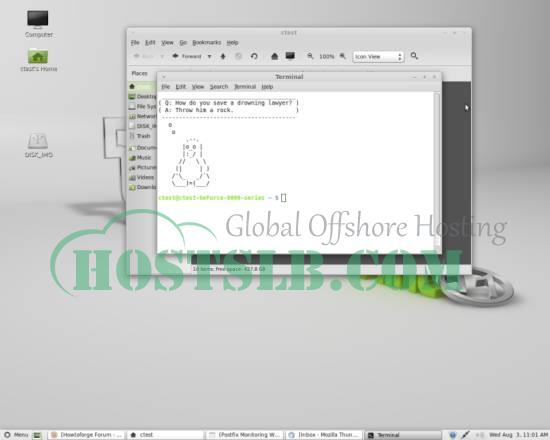 This tutorial is supposed to show new Linux users how to handle
Linux without having to browse through your desktop to edit files.
The core commands to do this are the same on every Linux distribution,
however there is a large variety of commands that differ from
distribution to distribution, as does the install command.if(typeof __ez_fad_position != ‘undefined’){__ez_fad_position(‘div-gpt-ad-howtoforge_com-medrectangle-3-0’)};

This document comes without warranty of any kind!

While Terminal may not always be helpful
on other operating systems, it is a powerful tool on Linux.
You can run every application you will need on it, install packages and
manage your files and folders by commands. However it is to be handled
with care, since unknown commands or commands whose causes are not
absolutely clear to you can cause a great deal of trouble and serious
damage. Try to prevent using these or backup your system before you do.
The screenshots of this tutorial are taken on Linux Mint 11.

Terminal is the tool where system commands can be used. You can find it on Menu > Terminal
. On startup you will be logged in as the current user. For some
commands it is necessary to be logged in as root. For this, there is a
special command that grants you permissions of root for the whole
session or for single commands. Be cautious acting as root though,
since
some system files need the root-user to be edited. Needing
administrative rights to edit files usually means that it can be
dangerous to do
so if one is not familiar with the tasks of the file. You will notice the symbols in the command line just before the
cursor position. The wave is the symbol for the current users home
folder. On
startup, this is the directory Terminal is pointing at. You are going
to learn how to change it soon.

To start with, we are going to create a text file via Terminal. As
said before, Terminal is right now pointing at your home directory.
This is
why the created file will appear there. To create a text file, we are
going to use the following command: This will create an empty text file named test.txt.
However, we are not happy with the file just being placed
in our home directory. That is why we create another directory and move
our just created empty file there. To create a new directory in our
current one, we use: mkdir stands for “make directory” and
followed by a name it will create a new empty directory with the chosen
name (here: fortesting) in our
current directory. Since we now have a folder to place our text file
in, we proceed by moving it there. To do that, we use following command: The mv command ist used to rename or
move files from one to another directory. You may notice the dots
before
each pathname. They indicate that the path starts in your current
directory so in our case, the dot stands for the home direcory. There
is also
the option to place two dots in a row which indicates that the path
starts from the directory above the current one. So what we are doing
is
to move the test.txt from the home directory to fortesting, which also
is a folder inside the home directory.
mv can also be used to rename single files. It works the same way as
moving them. Let us rename our test.txt: To delete our created file, we use the rm (remove) command. To delete an empty directory such as the one we just emptied we need another command:

In this case we used the rmdir command which removes an empty directory (dir for directory). Notice that I did not place a dot before the path of the directory! If you are in the same directory as the objects you are working with, you can just enter their name as path.

As mentioned before, the directory paths used in commands are
introduced by a dot while acting out of your current directory. Because
paths can cover a whole lot of directories if you are managing files
deep down your system, it makes sense to change the directory you are
acting in sometimes. To do that, we use the following command:

You will notice that the commandline now shows the subdirectory the Terminal is in. If you introduce directory paths with a single dot, in our example
we will now act in the fortesting folder. To act in the folder above,
which is now our home folder, we use the double-dot. To copy the just created file, we use the following command:

The cp command needs a file to copy as input and a destination to
know where to copy targeted file. The name of the copy has to differ
from the original one. To learn more about commands you can use, type in:

Replace [command]with the command you want to learn about. Terminal will then give you a manual for the chosen
command. This is how it looks like if you chose man itself as [command]: