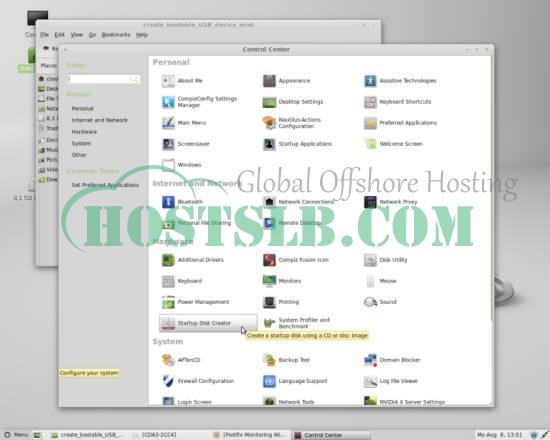 This tutorial will show you how to make your USB hard disk device a bootable Linux system.

Linux Mint 11 needs about 4.7 gigabyte of free space on your hard
drive, so make sure your device has at least that much space available.
I am using an 8 gigabyte stick which is enough to install Mint on it
and additionally have some space left to save data. In my case, I will
install Linux Mint 11 on my USB device, but it should work similarly
with other systems. To create a bootable disk, you need either an
iso-image of the desired Linux system or a real Linux DVD.

The first thing to do is to open the Control Center in the main menu. On the Hardware group, you will find an application called Startup Disk Creator,
which you need to open. Once klicked, a new window will come up. You
are now asked to insert the boot disk which shall be written on your
USB device. You can now either enter a disk in your disk drive oder
browse through your system to find an iso image of a Linux Mint boot
DVD. The second step is to select the device which the image will then
be written on. Enter a USB device with a recommended minimum capacity
of 8 gigabyte and select it as Disc to use
if not autoselected. The device you will be using as boot device should
be erased before writing the image onto it if there is not enough space
left. Therefore, either right-click it on your desktop, select Format… and confirm by clicking Format again, or stay in the Startup Disk Creator window and klick on Erase Disk. if(typeof __ez_fad_position != ‘undefined’){__ez_fad_position(‘div-gpt-ad-howtoforge_com-medrectangle-4-0’)}; Select the amount of space used on the system to be installed to store
own documents and settings then. Confirm by clicking on Make Startup Disk and the installation should begin. If an error occurs, try to reboot your computer, reinsert and format your USB device again. After the installation is done you first need to change the syslinux.cfg file of the newly installed system. Therefore, browse the USB device and find the syslinux folder. Open the contained syslinux.cfg with a texteditor of your choice. The first line of the document should say:

Before you boot from the USB device, it is recommendable to change this first line into

In case you forget to do this, on startup you will be shown this error message:

If this error occurs (you need to edit other settings however before
you can actually boot from the USB device), you can do manually what
the computer would have done automatically after editing the syslinux.cfg file. Just hit the TAB key and enter live. The system should then reboot normally.

To make your computer actually boot from your USB device, you first
need to enter BIOS and change the boot device settings. For this,
reboot your computer and hit the Del key
when told so to enter the settings. On most systems you can just
continuously hit the key during the boot process, some do not even show
the message to do so.

Once you entered BIOS you need no look for the
boot options, which are in the Advanced Setupsection
for me. In there, you first need to change the primary hard
disk drive to boot from (not the primary boot drive yet). Your current
hard drive should be set as primary hard disk drive for the moment.
Select that by using your BIOS’ key input instructions and change it to
the bootable USB device which must be plugged into the computer to be
listed here.

Now that you have done that, the entry that contains your
hard disk to boot from under boot settings should automatically have
changed into your USB device’s name. If not, select it manually.

Notice
that if your hard disk drive is not selected as primary boot
device you have to eject all disks that would be booted before your USB
device, such as the Linux Mint installation disk which you used to
create your booting device. Having finished this step, press the key to
save your BIOS settings (F10 for me) and
leave the BIOS by confirming the upcoming dialogue.

Your system should
now boot from your stick instead with your computers hard drive. You
can now create and save files on your USB device just as on a normal
computer’s hard drive since you have reserved space during the process
of configuration.

If you do not want to have the operating system on your USB device
any longer, you can just format or erase it as you have done before the
installation.

It is recommended to have your CD/DVD drive
as primary boot device, followed by your hard drive as secondary boot
device. Save your settings and confirm to leave BIOS. Your computer
should reboot from its hard drive as before now.